Here’s something you don’t come across every day:

What is a singer? It is someone who sings in the shower every morning like everyone … But, then you go to a recording studio and record the same song you made up in the shower. Except you’ve found crazy enough people to invest on the shower so the shower becomes a hit.

There are plenty of things about French vocalist Camille that might make someone roll their eyes. Body percussion has something of a dubious reputation in my circles; few dispute the talent required, but most tend to remember the likes of Bobby McFerrin with an unfortunate cringe. While one-hit wonders come and go, perhaps even worse a fate is to be forever branded with such an object of derision as “Don’t Worry, Be Happy”.

This does not seem to present much of a problem for Camille. With songs like “Cats and Dogs”, or “Gospel with No Lord”—the first single off her new album, Music Hole—her irreverence is considerably more subtle than we might recall of McFerrin’s lucrative but denigrated legacy. 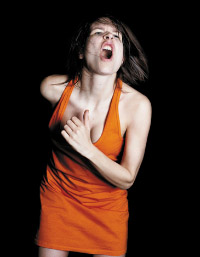 At least, it seems that way now. It feels strange, indeed, to find myself so taken with a sound at first exposure. The history of such briefly-acquainted infatuations is fraught with disaster. How many cassettes and compact discs lay forgotten in boxes tucked away in garages or storage units, ne’er discarded entirely for some bizarre sentiment despite the fact that they will probably not be heard on our own sound systems ever again?

Nonetheless, Camille has my attention. And while she isn’t touring stateside until at least after the new year, I don’t expect her star to pass like another tumultuous fad. There is more here than a couple of pleasing intervals laid atop an overwrought chord progression and a familiar gleam of polymerized, synthetic emotion. Rather, there is music, real and inspired.

(A tip of the hat to Public Radio International’s The World, just one of many reasons listener-powered radio deserves as much support as we can give it.)