It’s one of those things that gets lost in translation. I don’t know which movie it was, but at some point during the Harry Potter saga, I had to look up the word “jumper”, because it clearly didn’t mean the same thing in England as it does in the States. And so it goes. Lorry, flat, lift, jumper … flapjack?

A school has banned triangular flapjacks after a pupil was injured by one.

Dinner staff at Castle View school in Canvey Island, Essex, were told to cut the treat into squares or rectangles following the incident.

It is understood that the triangular version was banned after one was thrown, hitting a boy in the face.

Americans reading those sentences will naturally be aghast: How th’fuggidy get hurt by a flapjack? And, naturally, there is an answer. 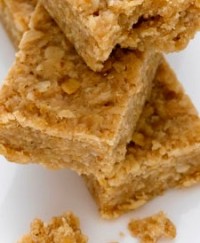 In the States, of course, a flapjack is a soft round thing; one is hard-pressed to ascertain the danger. The idea that it could injure someone if cut into a triangular shape is viscerally absurd. But across the Pond, a flapjack, it turns out, is something more akin to a soft granola bar.

The county council in Essex made a point of reminding that the triangular flapjack ban was none of their doing, while a school spokesman managed to sound so gravely British: “I can confirm that the texture and shape of the flapjacks were reviewed following an isolated accident last week.”

Part of me waits and wonders what the nannynoiacs will say. You know, like kids are going to be kids, and we only hurt society and weaken the human species by banning triangular oat bars in school cafeterias.

And part of me is having a Beavis and Butthead moment: It really does happen ….