Just a note related to my recent post considering the accusations of fatism in Pixar’s WALL•E. Over at Slog, Charles Mudede offers a philosophical analysis of the film:

The transformation, which is pictured on the commander’s wall, has this as its meaning: the infantilization of humanity is the final result of the capitalist mode of economic production and parliamentary politics. It is not without meaning that the last organic things are infantile humans (Neitzche’s last man, the absolute couch potato) and cockroaches. The superman—that rare and wonderful thing—has been reduced to a weed in a boot.

END_OF_DOCUMENT_TOKEN_TO_BE_REPLACED

Okay, this is a bit much. Let us start with a simple proposition:

Is there only one way to view art?

If we want to complicate that question, we might ask whether that one perspective properly considers all potential factors, and whether it should. 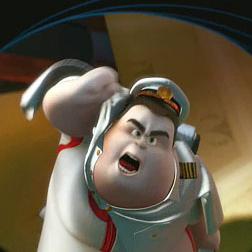 Pixar's WALL•E has received criticism for its treatment of obesity.

The current controversy surrounds Pixar’s latest release, Wall•E, a dazzling and charming shoe-in for the Academy’s “Best Animated Feature” award. Apparently, the film has caused something of a stir among the sensitively obese. However, as quickly becomes apparent, that complaint depends on the proposition that there is only one way to view Wall•E.
END_OF_DOCUMENT_TOKEN_TO_BE_REPLACED

I obviously haven’t been trying hard enough. This story made Rolling Stone last month, and I completely missed it:

Founded in the early Sixties by refugees from other Tacoma groups, the Sonics were newcomers to a fiercely competitive Northwest scene already ruled by more technically accomplished bands like the Wailers (not the Jamaican group) and Paul Revere and the Raiders. “There was no decision to play more aggressively than the other guys,” Parypa says of the Sonics’ first rehearsals and shows. “A lot of it was lack of ability. We couldn’t play with technique. So we pounded on everything instead” ….

…. “The Witch,” a Number Two hit in Seattle, established the Sonics as regional heroes, and they were soon making a thousand dollars a night in Northwest clubs, huge bread for the day. But the band’s singles, issued on local labels, never charted in Billboard, and the good gig pay kept the Sonics close to home. “We were immature and un-business-like,” Parypa admits. “Our immediate goal was, how many women can we pick up tonight? We’d put our instruments in the van after a show, and not get them out again until we had to play someplace else. If we had a recording session, sometimes we didn’t write the material until we were in the studio.”

Now that is a proud heritage.

“If you come to these shows expecting top musicianship, you’re in the wrong place,” Parypa warns. “But if we can blow your face off, that will be cool.”

• Tony Sachs reviews The Sonics at Cavestomp for Huffington Post
• Knute Berger on The Sonics at Crosscut
• Mary Huhn covers the return of The Sonics for—get this—the New York Post
• And from overeas, the British site ContactMusic did not let The Sonics’ reunion go unnoticed