It’s time to write this. Not so much that I’ve been avoiding it, although it’s never fun to face up to such stupidity. In the days since, I’ve been wondering about the obvious cue I missed in taking a gamble and biting the hook about flying penguins. Indeed, as I mentioned to a (the) commenter on that entry, I have embarrassed myself much worse in the past. In the end, though, there are certain reasons I fell for it, and rather than pleading in a perverse defense of pride, perhaps we might extract from this unfortunate episode a certain lesson. There are three primary reasons I took the bait:

I do wonder if, had I actually seen the Mirror article, I would have decided as I did. Indeed, their description of “flying penguins” differs from the Telegraph‘s—despite referring to the same BBC footage—and sounds a bit more like a joke. At the time, I was only aware of the Mirror because BBC News mentioned the article in a roundup of daily headlines from the British press.

And perhaps I should have been more wary of Terry Jones. Then again, we’re expected to receive Michael Palin, for instance, as a legitimate program host. The combination of who, when, and what, however, should have been enough to simply keep my mouth shut and celebrate quietly. My disappointment, then, could have been quiet and, perhaps most importantly, private. I could have learned a couple of lessons without risking embarrassment. But I just had to go and post it. I wish I could say it was late, and I was tired, but by my standard it wasn’t that late.

I also wish I could say the original post was a performance art piece, and I gave some thought about trying to pass it off as such. But, while I’m hardly a poster child for credibility, the world is already overflowing with shysters and, besides, it’s not that embarrassing. Those who know me well enough to harp on the point also know I’m prone to fantastic leaps of faith.

And that, in the end, seems to be the great lesson. I really wanted it to be true. Enumerating the myriad sentiments influencing that hope is an exercise in futility, but I alluded to the primary influence in my response to Fly On The Wall: “I can only wonder what Opus is thinking tonight.”

So for various reasons, I wanted the story to be true. We all have, in our lives, certain ideas we want to be true. And for these ideas we tend to lower our standards, open ourselves to certain deception. In retrospect, I should not even have required the Mirror‘s description of the footage—

They launch themselves down steep icy slopes with an upward curve to get the momentum to take off.

Then they flap their tiny wings to reach a steady cruising speed before eventually crashing back into the water.

—to tell the difference. In the days since, I have considered the question of how I ever thought those wings could carry those bodies, and the only answer I can come up with is that I overlooked the obvious, the physics of flight, because I wanted to believe that penguins could fly. I was so enraptured with the proposition that, as my response to reader comment indicates, I was more concerned with justifying the improbability of the perspective of the BBC footage than the content:

I mean, that shot of the penguins over South American forest land is just bizarre, both for the scene in general and the perspective specifically. But after the Planet Earth series, I have much faith in their ability to get the truly insane shots. Flying next to penguins, for instance.

So even while I cannot in any good faith pass this episode off as a deliberate performance to make a specific point about the dangers of hope and faith, we might come away with that lesson nonetheless. Patriotism, true love and happily ever after, even God: it is much easier to be fooled if we deceive ourselves. It is much easier to deceive ourselves if we want to believe the lie. At some level, even when the prospect is bleak, we can take comfort in self-deception. In saying it is hopeless we might surrender, or lay down to die, without feeling guilty at having given up the fight.

I slept with Faith, and found a corpse in my arms on awaking; I drank and danced all night with Doubt, and found her a virgin in the morning. (Perdurabo) 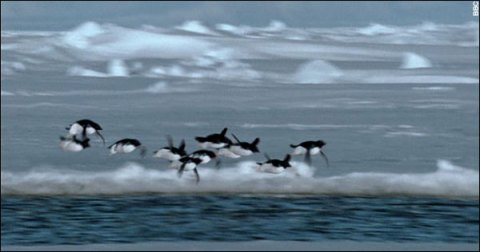 Yes, that is exactly what you think you’re seeing.

I mean, how freakin’ cool is that?

According to the Telegraph, BBC program host Terry Jones explained,

We’d been watching the penguins and filming them for days, without a hint of what was to come …. But then the weather took a turn for the worse. It was quite amazing. Rather than getting together in a huddle to protect themselves from the cold, they did something quite unexpected, that no other penguins can do.

Apparently a BBC crew witnessed the flight of the Adélie penguins from King George Island—750 miles south of the Falklands—while filming for an upcoming series called Miracles of Evolution. 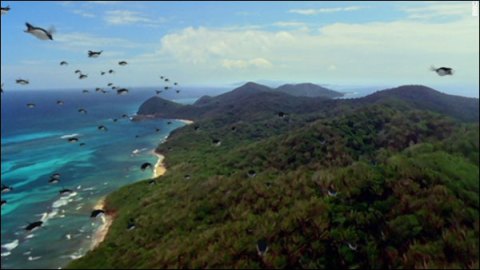