Editorial cartoonist John Cole comments, at his blog for The Times-Tribune:

I don’t know who’s dumber: Kids who shoot nudie pictures of themselves using their cell phones, or school officials who confiscate those phones for unrelated reasons and then rifle through them for said pictures.

While a quiet controversy continues about whether people should be haunted for life because of stupid decisions they made as a teenager, a more disturbing consideration arises out of an ACLU lawsuit filed against officials at Tunkahannock Area High School, where Principal Gregory Ellsworth is accused of confiscating student cellphones, and then searching through them in hopes of finding nude pictures of minors. David Singleton reports, for The Times-Tribune:

According to the lawsuit:

On Jan. 23, 2009, a teacher confiscated the high school student’s cell phone because she was using it on school grounds, in violation of school policy.

Later that day, she was called to Principal Gregory Ellsworth’s office. Mr. Ellsworth told her the phone had been turned over to law enforcement after he went through its contents and found “explicit” photos stored in its memory.

The photos, which were not visible on the phone’s screen and required multiple steps to locate, were never circulated to other students, the suit stated. In most of the images, the student appeared fully covered, although several showed her naked breasts and one indistinctly showed her pubic area.

The student was given and served a three day out-of-school suspension. According to the district’s student handbook, the first offense for cell phone misuse is a 90-minute Saturday detention and the confiscation of the phone for the rest of the day.

A few days later, the student and her mother met with David Ide, chief county detective in the district attorney’s office, who told them he had seen the photos and sent the phone to a crime lab in Delaware.

The suit alleges that when the mother stepped away, Detective Ide told the student it was a shame she had not waited until after her 18th birthday in April 2009 because, instead of getting into trouble, she could have submitted the photos to Playboy magazine. He suggested the student contact him, winking as he said, “I’ll get you your phone back,” according to the complaint.

Shortly after, the student and her mother received a letter from Mr. Skumanick threatening felony child pornography charges if the student did not complete a five-week re-education course on sexual violence and victimization. The student paid a fee of about $100 and took the course to avoid prosecution.

END_OF_DOCUMENT_TOKEN_TO_BE_REPLACED

File under, “Ouch”. And then visit Milt Priggee: 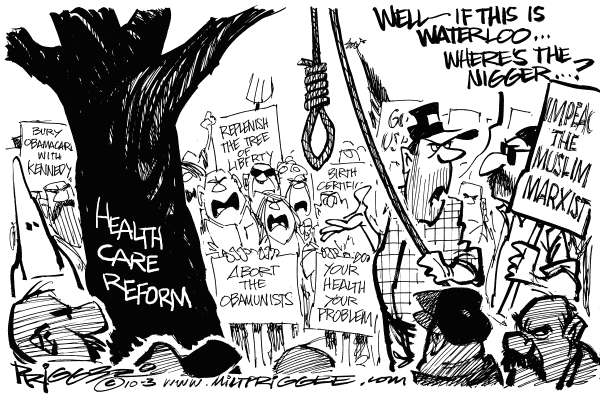 If the above makes no sense, just skip it. There is no law that says everything must make sense to you.

END_OF_DOCUMENT_TOKEN_TO_BE_REPLACED 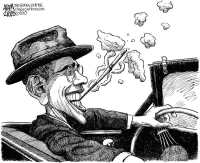