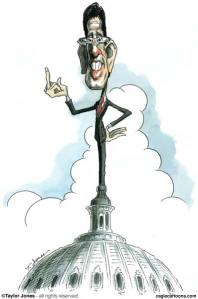 So what’s really motivating the G.O.P. attack on the Fed? Mr. Bernanke and his colleagues were clearly caught by surprise, but the budget expert Stan Collender predicted it all. Back in August, he warned Mr. Bernanke that “with Republican policy makers seeing economic hardship as the path to election glory,” they would be “opposed to any actions taken by the Federal Reserve that would make the economy better.” In short, their real fear is not that Fed actions will be harmful, it is that they might succeed.

Hence the axis of depression. No doubt some of Mr. Bernanke’s critics are motivated by sincere intellectual conviction, but the core reason for the attack on the Fed is self-interest, pure and simple. China and Germany want America to stay uncompetitive; Republicans want the economy to stay weak as long as there’s a Democrat in the White House.

GOP stalwart Bruce Bartlett, a veteran of the Reagan and Poppy Bush administrations, as well as former aide to Reps. Jack Kemp and Ron Paul:

It is starting to look like 1937 all over again. As the table below indicates, the economy made a significant recovery after hitting bottom in 1932, when real gross domestic product fell 13 percent. The contraction moderated considerably in 1933, and in 1934 growth was robust, with real G.D.P. rising 11 percent. Growth was also strong in 1935 and 1936, which brought the unemployment rate down more than half from its peak and relieved the devastating deflation that was at the root of the economy’s problems.

By 1937, President Roosevelt and the Federal Reserve thought self-sustaining growth had been restored and began worrying about unwinding the fiscal and monetary stimulus, which they thought would become a drag on growth and a source of inflation. There was also a strong desire to return to normality, in both monetary and fiscal policy.

On the fiscal side, Roosevelt was under pressure from his Treasury secretary, Henry Morgenthau, to balance the budget. Like many conservatives today, Mr. Morgenthau worried obsessively about business confidence and was convinced that balancing the budget would be expansionary. In the words of the historian John Morton Blum, Mr. Morgenthau said he believed recovery “depended on the willingness of business to increase investments, and this in turn was a function of business confidence,” adding, “In his view only a balanced budget could sustain that confidence.”

At the same time, the Federal Reserve was alarmed by inflation rates that were high by historical standards, as well as by the large amount of reserves in the banking system, which could potentially fuel a further rise in inflation. Using powers recently granted by the Banking Act of 1935, the Fed doubled reserve requirements from August 1936 to May 1937. Higher reserve requirements restricted the amount of money banks could lend and caused them to tighten credit.

This combination of fiscal and monetary tightening – which conservatives advocate today – brought on a sharp recession beginning in May 1937 and ending in June 1938, according to the National Bureau of Economic Research. Real G.D.P. fell 3.4 percent in 1938, and the unemployment rate rose to 12.5 percent from 9.2 percent in 1937.

And then there is this, from John S. Irons of the Economic Policy Institute:

The agreement to raise the debt ceiling just announced by policymakers in Washington not only erodes funding for public investments and safety-net spending, but also misses an important opportunity to address the lack of jobs. The spending cuts in 2012 and the failure to continue two key supports to the economy (the payroll tax holiday and emergency unemployment benefits for the long term unemployed) could lead to roughly 1.8 million fewer jobs in 2012, relative to current budget policy.