Click the image—or one of the links below—for more.

Andrew Sullivan pauses to consider a recent column in the Washington Post addressing the torture question:

Cohen is right that this should not be a partisan matter, as Cheney has so shrewdly made it, turning the Republicans into the party of torture, and prepping to blame Obama for the next terror attack, which is inevitable. But he is wrong that torture is complicated. It isn’t. It was never complicated before Bush and Cheney instituted it. It was once an exceptional, once-in-a-lifetime, ticking bomb extra-legal necessity. Now it is legitimate according to Charles Krauthammer, the chief intellectual architect of the torture regime, if it saves merely one life.

I don’t take issue with Sullivan, per se, but thought it important to remind that there is no ticking bomb scenario. Or, as James Oliphant, of the Chicago Tribune blogged in May, 2008, of a House Judiciary hearing:

After the hearing, Conyers noted that no witness was able to describe a “ticking time bomb” scenario which would make extreme interrogation necessary.

“Radio silence was the response when today’s witnesses were asked to identify a single example of a true ‘ticking bomb’ scenario ever occurring, even though such scenarios are often invoked to justify torture,” Conyers said. “These scholars, who have studied this issue extensively and have intimate knowledge of the legal authority the administration sought, could not identify a single example. I hope that the administration officials who have agreed to testify will shed some light on this and many other questions raised in today’s hearing.”

(It is worth noting that in the browser tab and title, the article is called “Torture’s Ugly Dialogue”, but the headline assigned the story is “Torture’s Unanswerable Questions”. Not sure what the difference actually means, but it sticks out pretty obviously.)

Tom Degan wrote in from New York to point out Chris Wallace’s FOX interview with former Vice President Cheney, noting that, “Someone described it as a starry-eyed teenage girl interviewing one of the Jonas brothers”.

Indeed, sir, and thank you for raising the point; that would be Mr. Sullivan:

Now look: there are softball interviews; and then there are interviews like this. It cannot be described as journalism in any fashion. Even as propaganda, which is its point, it doesn’t work – because it’s far too cloying and supportive of Cheney to be convincing to anyone outside the true-believers. When it comes to Cheney, one of the most incompetent vice-presidents in the country’s history, with a record of two grotesquely botched wars, war crimes and a crippling debt, Chris Wallace sounds like a teenage girl interviewing the Jonas Brothers.

And then the apology for asking the questions Cheney wanted asked:

WALLACE: Well, we want to thank you for talking with us and including in your private life putting up with an interview from the likes of me.
CHENEY: It’s all right. I enjoy your show, Chris.
WALLACE: Thank you very much, and all the best sir.

When future historians ask how the United States came not only to practice torture but to celebrate it and treat torturers as heroes, a special place in hell among the journalists who embraced and justified it should be reserved for Chris Wallace.

That’s going to be a very crowded place (see here for more on Wallace’s particularly well-deserved consignment to that locale).

I don’t know, though. I haven’t watched the interview. Dick Cheney is one of those people I’ve enjoyed not needing to pay attention to; since he stopped being vice president, it’s been something like a cross between bad stand-up comedy and an old-tyme circus geek show. I keep expecting to find him sitting in a bunker somewhere sucking the kidneys out of liberal bloggers’ children, or something. There’s an old Hap Kliban cartoon called “Show Your Symptom” ….

If you haven’t seen this one, you’re even farther out of the loop than I am.

LIMA, OH — Roy Shybinski, an uneducated 33-year-old forklift operator from Lima, is making final preparations for his national radio address tomorrow on The Rush Limbaugh Show. Shybinski, who has been “waiting a long time to speak my mind” … will speak to an expected audience of 32 million when he calls Limbaugh’s radio program shortly after 1 p.m. EST.

Now, if you’re wondering what that means— 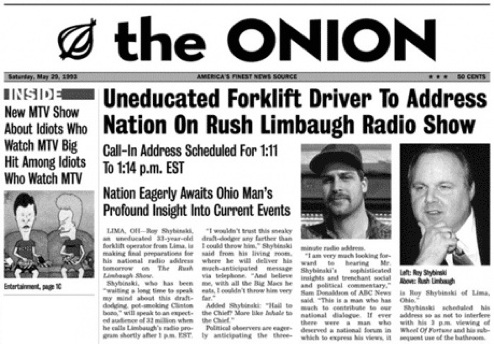 Sometimes, things get lost in translation. When I was younger, I recall hearing about the trouble Chevrolet experienced when it tried to sell its famous Nova south of the border. Apparently, nobody stopped to think about how a car named “no go” would sell in Mexico. And there was talk, also when I was younger, about how the famous video game Donkey Kong landed in Japan with a title that translated, roughly, to “Stupid Kong”.

International communication, we learned, can be problematic in very fundamental ways.

What about translation problems within the language, though?

Like Roger Cohen’s recent column for the International Herald Tribune, called “Obama and the planet“. Now, remember, one of IHT’s owners is the New York Times. This is only important because I can’t quite figure out why the Times ran the same article under the title, “Obama in Orbit“.

Aside from that question, it’s an interesting article well worth the time:

If the globe can’t vote next November, it can find itself in Obama. Troubled by the violent chasm between the West and the Islamic world? Obama seems to bridge it. Disturbed by the gulf between rich and poor that globalization spurs? Obama, the African-American, gets it: the South Side of Chicago is the South Side of the world.

Michael Ignatieff, the deputy leader of Canada’s opposition Liberal Party, said: “Outsiders know it’s your choice. Still, they are following this election with passionate interest. And it’s clear Barack Obama would be the first globalized American leader, the first leader in whom internationalism would not be a credo, it would be in his veins.”

To the south, in Mexico, resentment of the Bush administration has less to do with American unilateralism and more with stalled immigration policy and the building of a border fence. But the thirst for change is the same.

“Mexicans want evidence that things are shifting, which means the Democrats, and of course a woman like Hillary Clinton, or a black like Obama, would signal a huge cultural change,” said Jorge Castañeda, a former foreign minister.

“My sense is the symbolism in Mexico of a dark-skinned American president would be enormous. We’ve got female leaders now in Latin America — in Chile, in Argentina. But the idea of a U.S. leader who looks the way the world looks as seen from Mexico is revolutionary.”

Cohen also points to an article by Andrew Sullivan for the December issue of The Atlantic that considers, among other things, the value of the ethnic card for the Obama campaign. Sullivan writes:

Consider this hypothetical. It’s November 2008. A young Pakistani Muslim is watching television and sees that this man—Barack Hussein Obama—is the new face of America. In one simple image, America’s soft power has been ratcheted up not a notch, but a logarithm. A brown-skinned man whose father was an African, who grew up in Indonesia and Hawaii, who attended a majority-Muslim school as a boy, is now the alleged enemy. If you wanted the crudest but most effective weapon against the demonization of America that fuels Islamist ideology, Obama’s face gets close. It proves them wrong about what America is in ways no words can.

And, yes, there is a valuable point there that cannot be ignored. But there is also a flip-side. Just so nothing gets lost in translation: Americans don’t care. You don’t want them to care about this particular point, because if they do, they will resent the obligation to consider the ethnic card.

In the end, the only question Americans care about is, “Can he do the job?” “Will he tell me what I want to hear?”