Oh, the country club set. Who else can bring such proud drama to the American heritage?

An Army reservist and Iraq veteran who works as a cabdriver says a passenger he picked up early Friday at a Northern Virginia country club accused him of being a terrorist because he is Muslim, then fractured his jaw in an attack being described by Islamic activists as a hate crime.

Mohamed A. Salim says the passenger compared him to the men accused of carrying out the Boston Marathon bombing 11 days earlier and threatened to kill him.

The Washington Post report from Joe Stephens and Justin Jouvenal reports that Ed Dahlberg, of Clifton, Virginia, has through his attorney released a statement asserting his innocence:

Ed Dahlberg of Clifton, who has been charged with misdemeanor assault, denied hitting Salim in a statement released by his attorney ….

…. Dahlberg’s attorney, Demetry Pikrallidas, said Dahlberg did not assault Salim. Even so, he said, Dahlberg wanted to apologize to anyone offended by his remarks. Dahlberg was profoundly affected by the Sept. 11 attacks, Pikrallidas said, and misunderstood Salim’s response to his questions.

Dahlberg “became rather emotional as the discussion turned to jihad and 9/11, and especially heated on the subject of jihadists who want to harm America,” Pikrallidas said in a statement.

Pikrallidas described Dahlberg as a “hardworking family man and a church-going person” who had been drinking but was not intoxicated. He stressed that Salim’s video shows the ride began with six minutes of friendly conversation.

Perhaps the first thing that stands out is the starkly different claims; Dahlberg did not, according to his attorney, strike Salim. The question therefore arises: When someone asks why you are punching him, if you’re not punching him, don’t tell them that you’re punching him because, “You’re a [expletive] Muslim.”

Just, you know. Simple advice that comes to mind.

END_OF_DOCUMENT_TOKEN_TO_BE_REPLACED

I know it’s not much for a post, but this cartoon just cracks me up: 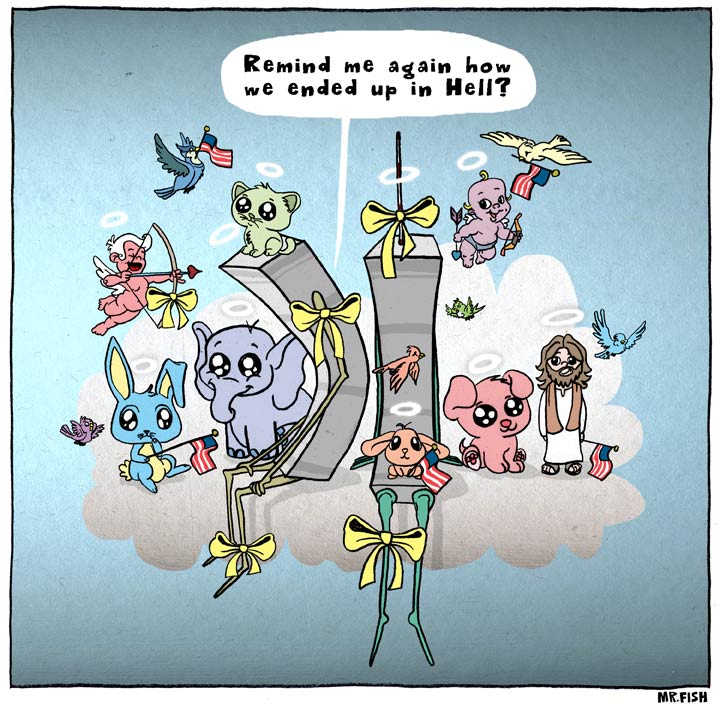 END_OF_DOCUMENT_TOKEN_TO_BE_REPLACED

Just how far have we come? When you’re a child, twenty years is a theoretic span; as an adult, that period is a paradox. What seems so far away passed by so quickly. What seemed so familiar recedes into strangeness, transforms into myth.

I don’t remember what I said. I mean, it had something to do with the Reagan administration, and characterized someone, or some people, within that cadre as criminals. I despised Reagan; my political conscience came online about the same time he was elected. I cannot recall ever thinking nice, or merely positive things about the man.

I was seven when he was elected. The only thing I remember clearly from that election was that Reagan struck me as condescending and dishonest, exactly the kind of person my parents would repeatedly through my childhood tell me I didn’t need. And that stuck with me. By the time we got to Iran-Contra, the pretense (that later proved at least partway true) of Reagan’s senility was insufficient to excuse him in my eyes.

What? It was how I was raised; those conclusions reflected the principles impressed upon me especially by parents, but also teachers, my pastor, and any number of talking heads inside the idiot box.

But this isn’t about indicting Reagan. He’s dead. He’s gone. Whatever.

Whatever condemnation I had poured over the Reagan administration had upset him. And, yes, there is also a story to the difference between the man I remember and the one I know today. Maybe someday I’ll try to tell it.

Perhaps it had to do with an adolescent daring to condemn the president. Maybe he was so fiercely Republican during those years that he could not face the possibility that his president was a sack of shit. Maybe it had to do with respecting elders, and respecting authority. Maybe, maybe, maybe ….
END_OF_DOCUMENT_TOKEN_TO_BE_REPLACED

Georgetown University’s Chris Cimaglio offers one of the better summaries of the challenges facing the GOP presidential candidates. A highlight:

Despite his record as a cross-dressing, pro-choice, pro-gay rights, pro-gun control mayor of New York City, Rudy Giuliani wants you to know that he’s really a staunch conservative. He misses no opportunity to assert that he cut taxes 23 times as mayor of New York and exploit his reputation for leadership on 9/11 by reminding voters that he’s for torturing terrorists, terror suspects, anybody who looks like a terrorist, and the guy who looked at him funny on the street. Giuliani has apparently detained truth indefinitely as well. He is so shameless in his desire for the presidency that he has thrown his moderate credentials out the window in favor of ultra-conservative bluster. While his dramatic ideological change might not bother some conservative voters, Rudy will have more trouble covering up the fact that he married a woman he thought was his third cousin and was then stunned to discover that she was, in fact, his second cousin. He then proceeded to cheat on his second wife and move his girlfriend and future third wife into his house before his second wife moved out. As a result, Rudy’s children don’t speak to him and his daughter supports Barack Obama. Party of family values, indeed.

Mind you, none of this makes him, fundamentally, a bad guy. Not knowing who he was marrying? Some would say that is every guy. And it is, except it means something different in that context. Exploiting a terrorist attack for political gain? Is exploitation not the American way? Certes, except Hizzoner is now asking to be president, and if the last fifteen years of GOP attack dogs accusing character issues of damn near every Democrat they could find have not explained the expectations to Rudy, what good could that do him?

And, like, the cross-dressing thing. That should not be much of an issue, except for the fact that, as with his history on abortion, gay rights, and gun control, Hizzoner is supposed to be a Republican. The GOP has spent so much bluster trying to push homosexuals back into the closet that, yeah, the cross-dressing thing could be problematic. And, besides, who really wants to think of Rudy Giuliani in lingerie? The only thing I can think of that would be more disturbing is, well, yeah. Marv Albert. In … er … lingerie.