In the moment of learning that Edgar Ray Killen has died, what, precisely, should I feel? To the one, a small bit of evil has just left the world. To the other, what, he was an old man of infamous name, and is it really worth the investment of feeling anything? Edgar Ray Killen is dead at age ninety-two.

And life goes on, for the living.

Findings This difference-in-differences analysis of representative data from 47 states found that same-sex marriage policies were associated with a 7% reduction in the proportion of all high school students reporting a suicide attempt within the past year. The effect was concentrated among adolescents who were sexual minorities.

END_OF_DOCUMENT_TOKEN_TO_BE_REPLACED

With many thanks to Sean, a friend who pointed out this particular iteration of the morbid spectacle otherwise known as Westboro Baptist Church―see Anna Merlan’s report for Jezebel about the latest Westboro wannabe Christianishesque clodhopping―a certain question arises, a reiteration that occasionally demands address: 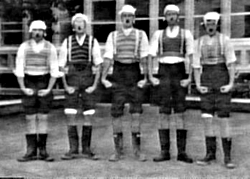 • Is it wrong that I only pay attention to WBC at all anymore because they’re like a comedy troupe performing a Christian version of The Aristocrats? I mean, it’s true: It was cruel of kids in my junior high to encourage the overweight, developmentally impaired kid to do stupid and humiliating things just so people could have a laugh. The Westboro heritage is similar; there is a tinge of guilt about paying attention to anything they do, as if we’re denigrating them just by watching.

How about some crass humor?

For some, the costs are higher. In 2010, 12-year-old Amanda Todd bared her chest while chatting online with a person who’d assured her that he was a boy, but was in fact a grown man with a history of pedophilia. For the next two years, Amanda and her mother, Carol Todd, were unable to stop anonymous users from posting that image on sexually explicit pages. A Facebook page, labeled “Controversial Humor,” used Amanda’s name and image—and the names and images of other girls—without consent. In October 2012, Amanda committed suicide, posting a YouTube video that explained her harassment and her decision. In April 2014, Dutch officials announced that they had arrested a 35-year-old man suspected to have used the Internet to extort dozens of girls, including Amanda, in Canada, the United Kingdom, and the United States. The suspect now faces charges of child pornography, extortion, criminal harassment, and Internet luring.

Hildur Lilliendahl Viggósdóttir, decided to draw attention to similar problems by creating a page called “Men who hate women,” where she reposted examples of misogyny she found elsewhere on Facebook. Her page was suspended four times—not because of its offensive content, but because she was reposting images without written permission. Meanwhile, the original postings—graphically depicting rape and glorifying the physical abuse of women—remained on Facebook. As activists had been noting for years, pages like these were allowed by Facebook to remain under the category of “humor.” Other humorous pages live at the time had names like “I kill bitches like you,” “Domestic Violence: Don’t Make Me Tell You Twice,” “I Love the Rape Van,” and “Raping Babies Because You’re Fucking Fearless.”

• Taking the Piss: A bit of a twist on the classic English phrase; put photos of Mark Zuckerberg in urinals, snap the photo, post them to a Facebook “humor” page.

• Use your imagination: Really, I can’t keep thinking like this. It’s actually uncomfortable. (See below.)

One would think the problems are obvious. To wit, how do we define fair? Do we really think this sort of thing would stay confined to activism? Of course it wouldn’t. And while fair is fair insofar as Zuckerberg is apparently just fine with how things go at Facebook, so why not treat him the same way, isn’t that also kind of the point? It’s wrong to treat any person that way, regardless of how much the Facebook CEO might occasionally look like he’s hoping you don’t get squirt in his face, and please not in the hair. (Spit or swallow?) Poor Mark. But then, billions of dollars do a lot to relieve the stresses of having a conscience.

Then again, it would be a good thing to hear people on television starting to refer to how a person got “zucked”. Shame might be the only way to test whether or not Mark Zuckerberg has a conscience left.

And if you’re confused? Just read through Catherine Buni and Soraya Chemaly’s article for The Atlantic. There’s a reason Facebook and Mark Zuckerberg are atrocities against humanity.

Begging your pardon, there are certain things we need to make clear. Let us start with two paragraphs from Judge Edward D. Rubin that bear actual life-altering influence:

The court grants the Petitioners’ Motion for Summary Judgment and denies the Defendants’ Motion for Summary Judgment. It hereby declares that La. Const. Article XII, Section 15 (the Defense of Marriage Act/DOMA) and La. Civil Code Articles 86, 89, and 3520(B) are unconstitutional because they violate the Due Process and Equal Protection Clauses of the 14th Amendment to the U.S. Constitution and Article IV, Section 1, the Full faith and Credit Clause of the United States Constitution. Louisiana’s Revenue Bulletin No. 13-024 (9/13/13) is likewise declared unconstitutional as it violates the petitioners’ rights guaranteed by the Due Process and Equal Protection Clauses of the 14th Amendment of the U.S. Constitution. Hence, Tim Barfield in his official capacity as the Secretary of the State of Louisiana Department of Revenue, is hereby ordered to act in accordance with this court’s ruling and allow the petitioners to file their state tax returns as a couple whose marriage is valid and recognized in Louisiana. The court hereby enjoins the state from enforcing the above referenced laws to the extent that these laws prohibit a person from marrying another person of the same sex. Additionally, having ruled that the petitioners’ marriage shall be recognized by the state of Louisiana, it follows that Angela Marie Costanza has satisfied the requirement of stepparent under the provisions of La. Ch. C. article 1243, which allows for intrafamily adoption. The court reaffirms its previous decision in Adoption of (__) which declared Angela Costanza’s adoption of (__) to be in the child’s best interest. The minor child, (__), is declared, for all purposes to be the child of petitioner, Angela Marie Costanza to the same extent as if (__) had been born to Angela Costanza in marriage. As such, the court further orders Devin George in his official capacity of the State’s Registrar of Vital Records, to issue a new birth certificate naming Angela Costanza as (__)’s mother.

The State of Louisiana is hereby ordered to recognize the Petitioners’ marriage validly contracted in California as lawful in this state, pursuant to the Full Faith and Credit guaranteed by Article IV, Section 1 of the United States Constitution.

This is what it looks like when justice comes.

There is, of course, a backstory.

END_OF_DOCUMENT_TOKEN_TO_BE_REPLACED

When it was Trayvon Martin, I pitched a fit.

Michael Brown? Not so much.

It’s fair to ask why, and the answer is to simply look at what is going on in Ferguson, Missouri. The twenty-one thousand plus residents have seen their city torn to pieces, body and soul, as protesters and police battle over the murder of an unarmed black man by a city police officer whose record includes being fired as part of another small police department in Jennings, Missouri, that was disbanded by its city council for being so corrupt and generally awful. The town is in chaos; residents are intervening to slow the most vocal protesters, and are also reportedly attempting to prevent media from covering the events. Ferguson has become the latest incarnation of our nation’s sick heritage of deadly racism, emerged as a symbol of our dark slide toward militarized police, and found itself the butt of one of the worst jokes on the planet after a protester tweeted a comparison of the situation there to what is going on in Palestine, and instead of being indignant the Palestinians tweeted back with good-faith advice.

I first addressed the death of Trayvon Martin with friends on March 13, 2012, some weeks after the George Zimmerman stalked and pursued him for no good reason, shooting the seventeen year-old to death and then claiming self-defense. And when I first mentioned it, I did not expect what was coming. Certes, my gorge rose to learn the story, but like so many Americans the idea that an apparently murdered black man will die under the presumption that he needed to be shot just did not seem all that unusual. That is to say, like many I expected Trayvon Martin would become another forgotten lamb.

This time, the nation did not wait weeks. Before the name Michael Brown finished echoing after the first wave of press coverage the town was beseiged by chaos. Screaming and shouting from my evergreen corner of the country really doesn’t do me or anyone else any good.

And, yet, Justice still seems nearly destined for disappointing failure.

END_OF_DOCUMENT_TOKEN_TO_BE_REPLACED

Certes, ’tis true that I am not one who generally appreciates certain modern shorthand, such as ^ ^, +1, or, shudder m’soul, ditto. Then again, Ryan Grim made the point many felt viscerally as the news broke.

The Court has basically just given up any attempt at coherence. It's just raw power. #HobbyLobby #HarrisvQuinn

So, right. It’s over. This is our quote of the year. I mean, come on, really: Yes, she said that.

END_OF_DOCUMENT_TOKEN_TO_BE_REPLACED

Honestly, I had thought we had gotten over the old gay vs. bi dispute.

And then along comes Vladimir Putin to reignite it.

“What if the umbilical cord was reattached and the baby stuffed back into the womb, would it cease to be a person?”

There is a backstory here.