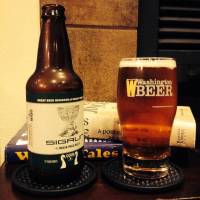 It occurs to me that beer ratings are largely arbitrary. To the one, no, I’m not talking about Platos, ABV, SRM, IBU, or anything like that. But, rather, to consider the beer scores: A sour beer can score in the 90s for Category Seventeen, but it’s still a sour beer. As a hophead, my score for beers is much different, focusing on various ales—namely IPAs—than we might find in a fan of the hints of coriander and what counts for citrus in a Belgian. And no, I cannot explain the lager phenomenon.

Meanwhile, Sigrun IPA, from Odin Brewing is one of those beers that gives me pause to consider how I judge the quality of my favorite pints.

The numbers on Sigrun are pretty straightforward: 6.1% ABV, all of 45 IBU, and a SRM of 6. The India Pale Ale features Pale, Rye, and CaraMunich malt, as well as Nugget, Bravo, and Apollo hops. Between the featureless, disgraceful (ahem!) “India Pale Ales” of some Brewers Who Shall Not Be Named and the shocking, smokeadelic green—i.e., “citrusy” and “piney”—frontrunners of the genre, like Green Flash West Coast IPA, Stone Arrogant Bastard, or Boundary Bay IPA, is this beer. Sigrun is to IPAs what Fat Tire hoped, once upon a misty memory, to be for micro- and craft-brewing. That is, it is nearly a perfect crossover beer.

Sigrun IPA has a little something for every part of the palate; a pleasant hop flavor that centers at the back of the mouth; a penetrating, lively wetness, refreshing at the edges of the tongue; the mouthfeel is as crisp as they come, very nearly violent in its sensation. Kind of like licking a battery, except both useful and sensuously rewarding.

There is a strange context askew in which something can be a nearly perfect example of its kind and yet wholly unsuitable. Sigrun is hardly unsuitable, but as a perfect beer it becomes clear that the real question is the context of perfection. Sigrun IPA seems like a perfet beer, but how?

Throughout the drinking are hints of what a west coast hophead finds utopic. Yet nothing about the draught is especially remarkable. If this was a video game, the character would have the perfect combination of upper-middling attributes that lend toward superstardom. It is only the combined effect of Sigrun’s diverse qualities that raises this beer to the fore. While there are certainly IPAs more spectacularly puristic, Odin Brewing’s Sigrun IPA is the sort of beer that can, as far as the genre is concerned, conquer the world.

So how do we score it? With a five-star scale, one must be careful about handing out fives. Clearly, this is a four-star beer, right? Almost perfect, but nothing can be perfect. And, certes, it comes late enough in the competition that the classic early performance question of Olympic gymnastics and figure skating—don’t score too high, else you run out of room for better shows—should fall by the wayside.

Even on a five star scale, Top Gun is, at best, a three star film; much like Jurassic Park, it is the height of B-class scripts filmed on an A-tier budget.

(Strangely, Gleaming the Cube is my definition of a two star film from that era ….)

Sigrun IPA is probably a three and a half star beer; I have yet to encounter it from the cask. Yet, in looking around we might find that it scores in the low- to mid-eighties among beer enthusiasts and professional critics, and this really doesn’t mean a lot to anyone who isn’t a specialist.

While my own palate suggests Sigrun could benefit from trying to figure that same mouthfeel and finish with an IBU in the sixties, we all know that beer is not so easily plug-and-play.

But here we find the lesson; there are plenty of beers that score in the nineties, and, well, much like a ninety-plus white wine is still a white wine, what does any of this mean to beer drinkers?

Sigrun is a great baseball beer; it will go with hot dogs, chicken, and I can’t even begin to describe its expected role alongside fish and chips. In many ways, it really is a member of that class aspiring toward perfect beerdom.

But I remember coming home from a tour of the United Kingdom and Ireland; the beer blues in the wake of Cask Marque sessions with local brewers only broke some months later when I found myself at the Deschutes Pub in the Pearl District of Portland, Oregon, and they offered both Inversion IPA and Bachelor Bitter from the cask.

Such as it is, Sigrun does not rise to that level. Then again, I’ve never had it out of the cask.