What doesn’t kill you only makes you look … er … um … right. 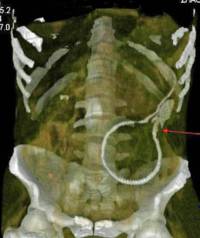 According to a HuffPost translation of a blogger’s post on Chinese message board forum Mop.com, the eel reportedly chewed through the man’s colon, perforating his large intestine, and became stuck in his body cavity. A graphic X-ray image (seen below) shows how far inside the eel was when the man came in for treatment.

Medical team members reportedly said the eel, which was “simply trying to find its way out,” was alive when removed but died shortly thereafter. According to The Sun, the man is still recovering at the hospital and might face animal cruelty charges.

And, you know, the sad thing is that this has happened before. A New Zealander needed medical help last year to remove an eel, and that came two years after a man in China actually died after being sexually abused with an eel by drunk friends who clamed it was all a joke until he bled to death internally. 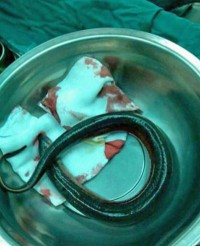 An eel in the whozat? What could possibly go wrong?

One thought on “What, What, in the What?”