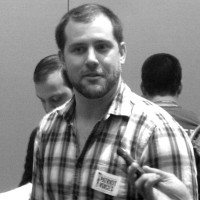 Conventional wisdom often pays homage to the belief that there really isn’t much difference between the two main American political parties; indeed, if one party displays problematic behavior, the response is often to point out that both parties do it.

And it’s true that bigotry is not confined to Republicans, or conservatives in general. But, as Savage notes, it’s kind of hard to find a similar Democratic- or liberal-side episode that rivals reports coming out of Maryland, where the Conservative Political Action Committee endured an encounter that, well, therein arisies the problem. Scott Keyes and Zack Beauchamp explain for Think Progress:

The exchange occurred after an audience member from North Carolina, 30-year-old Scott Terry, asked whether Republicans could endorse races remaining separate but equal. After the presenter, K. Carl Smith of Frederick Douglass Republicans, answered by referencing a letter by Frederick Douglass forgiving his former master, the audience member said “For what? For feeding him and housing him?” Several people in the audience cheered and applauded Terry’s outburst.

After the exchange, Terry muttered under his breath, “why can’t we just have segregation?” noting the Constitution’s protections for freedom of association ….

ThinkProgress spoke with Terry, who sported a Rick Santorum sticker and attended CPAC with a friend who wore a Confederate Flag-emblazoned t-shirt, about his views after the panel. Terry maintained that white people have been “systematically disenfranchised” by federal legislation.

When asked by ThinkProgress if he’d accept a society where African-Americans were permanently subservient to whites, he said “I’d be fine with that.” He also claimed that African-Americans “should be allowed to vote in Africa,” and that “all the Tea Parties” were concerned with the same racial problems that he was.

He claimed to be a direct descendent of Confederate President Jefferson Davis.

At some point it seems nearly comical, like the easiest agent provocateur gig in history; just get up and play whatever bigot caricature comes to mind, and find people in the conservative audience rallying to the cause. And it is true; there are times when one would be forgiven for thinking they were not dealing with a genuine conservative, but instead some overzealous, half-witted provocateur trying to discredit a movement.

One of my favorites was a conservative associate who reckoned that Obamanoia had nothing to do with racism, but rather that a fantasy president Obama was victimizing good, decent people by forcing them to resort to racist slings and arrows. “Race is absolutely not the motivation for opposition to Obama,” he explained, “but it is used by some as a tool in the fight against him.”

The idea, of course, being that it’s somehow the president’s fault that all these people can think of is skin color.

But one must look back decades to find this kind of open hatred in the Democratic Party. That’s not to say the Iowa labor Democrat the Washington Post found back in 2007, a woman who would not vote for Hillary Clinton because being president was not properly woman’s work, is wholly unique, but there is clearly a difference between individual members of an affiliation who wrestle with bad ideas and influential sectors of an affiliation who advocate bad ideas.

The Tea Party is a right-wing conundrum; sometimes the primary division within the movement seems to be those who advocate white, male, Christian supremacy and those who believe in white, male, Christian supremacy but are smart enough to hold their tongues. That the GOP is willing to court these elements is not in itself objectionable, but the prominence of racial and ethnic tensions, misogyny, religious supremacism, and homophobia within the Republican establishment is hard to ignore.

Still, though, a public upwelling of such sentiments—the proposition that bigots feel so empowered within the Republican Party—is an unsettling reminder that no, the major political parties in our American dualism are not the same. “Both sides do it” is not always an applicable response; indeed, in many cases it’s just a lazy attempt to hide from the obvious.

Which gives rise to a fine question: If it is wrong to accuse conservatives of various bigotries—racism, sexism, homophobia, religious supremacism, &c.—then it might behoove us to wonder why. Is it wrong because conservatives do not harbor such sentiments? In many individual cases, sure, but that invites the question of how one weights the scales. To wit, is fending off the horrible oppression of health care really so important that one would empower all these other bigotries? Is the resolution of consumer and corporate responsibility really so vital that one would oppress blacks, hispanics, women, Muslims, gays, and atheists as an unfortunate cost of the bargain?

But what of those who seem to think a place for everyone and everyone in their place means to line up in subservience to a master class? If it is wrong to accuse them of bigotry, then why do they not stand up and proudly advocate their hatred? That is to say, why are we supposed to be shocked at an outburst like the one reported at CPAC this week? After all, we’ve seen this behavior out of Republicans for a generation and more; it has only resolved more sharply since President Obama’s election in 2008.

Are bigotry and supremacism, then, gemini spectres with which conservatives must wrestle, unfortunate symptoms of a truly just society? Or are these just part of the basic outlook, something that conservatives should celebrate but for the evil forces of justice and equality that oppress them?