While Mr. Benen was responding to a quote from Rep. Eric Cantor (R-VA)—”And, you know, we’ve got a spending problem. Everybody knows it.”—on Meet the Press, the sentiment that the United States suffers from a “spending problem” is not exclusive to the House Majority Leader. You can find it throughout the Republican Party, and nearly everywhere you turn Beltway media punditry. But one can just as easily argue that we have a revenue problem, as in, not enough revenue. After all, one of the questions that confounds my conservative neighbors is what they think would happen if we destroy education funding, Social Security, Medicare and Medicaid, regulations for labor, food, and drug safety, and other programs that arguably work to augment the quality of life in the United States.

There is always an argument to be made that anything we do can be done better. And for most of the last sixty years there has always been an argument that the government spends more money than it collects. But if debt reduction is the sole cause at the expense of all others, that includes the expense of American quality of life.

Many in our society believe that if the government would just get out of the way, everything would be fine, and people would behave altruistically. When these were Anarchists on the left wing, like Emma Goldman, such ideas were despised. These days, coming from the libertarian right, we’re supposed to take the idea seriously. Once upon a time I asked an associate who is a Pauline Evangelist† just how life would suddenly get better if, as he advocated, we eliminated the Federal Reserve; he did not even try to answer, as the question confused him.

Still, though, this libertarian wishing well is a curious thing. It would seem to suggest that if not for labor laws, there would be no garment sweatshops in the U.S. Or, perhaps, if it wasn’t for those pesky European socialists with all their rules about food content, nobody would market horsemeat as beef. We might go a step further and denounce statutory rape laws, because without them, Catholic priests would not have molested American children.

Because, you know, history shows that human beings are inherently altruistic, and it’s only because there are rules in place that people decide to break them. Like child labor. There was no child labor until we invented child labor laws, right? Right?

Obviously, if we simply cut out all the government programs intended to protect and improve quality of life in Americans, our quality of life would increase exponentially.

Sarcasm aside, government can bring positive results. And if debt reduction is the only priority, those positive results are subordinate. In other words, they have to go.

Because, you know, we have a spending problem, and it’s all President Obama’s fault.

Which actually brings us back to the point: Some things bear repeating.

Such as Jed Graham’s point for Investor’s Business Daily:

Here’s a pretty important fact that virtually everyone in Washington seems oblivious to: The federal deficit has never fallen as fast as it’s falling now without a coincident recession.

To be specific, CBO expects the deficit to shrink from 8.7% of GDP in fiscal 2011 to 5.3% in fiscal 2013 if the sequester takes effect and to 5.5% if it doesn’t. Either way, the two-year deficit reduction — equal to 3.4% of the economy if automatic budget cuts are triggered and 3.2% if not — would stand far above any other fiscal tightening since World War II.

That would be the Fiscal Lurch chart above.

And, yes, it bears repeating. Graham seems to think so, since it reiterates a point he made last year:

Believe it or not, the federal deficit has fallen faster over the past three years than it has in any such stretch since demobilization from World War II.

In fact, outside of that post-WWII era, the only time the deficit has fallen faster was when the economy relapsed in 1937, turning the Great Depression into a decade-long affair.

If U.S. history offers any guide, we are already testing the speed limits of a fiscal consolidation that doesn’t risk backfiring. That’s why the best way to address the fiscal cliff likely is to postpone it.

While long-term deficit reduction is important and deficits remain very large by historical standards, the reality is that the government already has its foot on the brakes.

We must remember that the fundamental divide between liberal and conservative thought goes well beyond platitudes like “the role of government”, lest we conclude that the conservative assertion is that government should be a cowering victim—you know, weak enough to drown in the bathtub. “The role of government”, as such, is a bland euphemism for the shape of society and, ultimately, the entire human endeavor. Throughout history, conservatism has sought to reinforce entrenched privilege. Conservative ideas defended monarchies against republicanism in Europe. Jesus and Muhammad, both made controversial when entrusted to the conservative cause, were both exceptionally liberal in their time. In the nineteenth century, when the Republican Party was so liberal as to be “radical”, they opposed slavery. Democrats actually held the conservative position on that issue.

Perhaps the most obvious effect of the conservative ambition is the retention of privilege. It is easy enough to see in social justice issues: Christian supremacy, male supremacy, and even white supremacy. Perhaps it might surprise some people to know that the last “witch trial” in the United States took place less than forty years ago. It might also surprise some to learn that the right of a man to force himself upon his wife without calling it rape disappeared from the U.S. less than twenty years ago, and many states still hold the rape of a spouse to be a “lesser” crime. And, well, the fact that Birtherism exists these days is hardly a surprise to anyone‡.

Beyond such manners of social issues, the obvious is only subtle because it is less obvious. That is to say, many talk about greed, but it seems anathema to undertake the revolutionary leftist rhetoric that ossified stratification is actually a goal of such a prominent socio-political outlook instead of an accidental effect germinated by a few bad seeds.

It puzzles some to hear Republicans in Congress apologize to BP, or complain about government meddling in private corporations’ squandering of public funds. But it fits perfectly into the ideological template if we accept that conservatives theorize the only beneficiaries of society should be those who already benefit the most. The object is much similar to a pyramid scheme; all the rhetoric of free market and laws of nature demand winners and losers, and the conservative outlook seeks to protect the winners.

Consider Rep. Paul Ryan, formerly the GOP’s vice presidential nominee. During the campaign, he complained that President Obama wanted to take over seven hundred billion dollars from Medicare, and on the surface this is true. But Ryan lied about how that money would come out of the program, and tried to dodge the fact that his own economic plan would take a similar number from Medicare. While President Obama came to an agreement with health care providers, who understood that they would more than make up for the loss through new business under the PPACA, and thus avoided potential cuts to direct Medicare benefits for patients, Rep. Ryan wanted to use the money to finance a tax break for the wealthy. 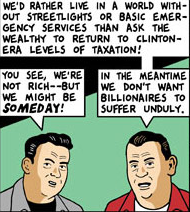 The problem is that, for obvious reasons, it would not be politically wise to state the mission in such clear terms. Conservatives must, in order to sell their outlook, frame the ideas within a pretense of helping as many people as possible. So they pitch the Horatio Alger myth, more recently derided as the “Tea and Crumpets Party”. And they have done a good job selling the myth.

Which brings us, once again, back to the point.

A “spending problem”? Well, sure. But ask conservatives what government should be doing. It should be paying private corporations to build devices of war, or using public money to throw people in private prisons. And these days, they want the government to pay private companies to conduct wars and run prisons. And if we are to have public schools, they should be run by private corporations. And, of course, we must remember that until a Democratic president supported the idea of the individual mandate, Republicans liked the proposition of using force of law to push people onto private-sector insurance rolls. Remember, the idea was originally promoted by the conservative Heritage Foundation as a counterproposal to forestall single-payer health care during the Clinton administration.

So how do we fix this “spending problem”?

The challenge facing politicians and voters alike is that three projects devour most of the federal outlay: defense, Social Security, and Medicaid. Democrats waver on Social Security and Medicaid; they would be more willing to reduce the outlay if the cuts occurred in a sensible context. But the Republicans are steadfast in support of defense dollars, and expect that all spending reductions should come at the expense of programs intended to protect and augment quality of life.

One can reasonably argue a legitimate “spending problem”, but that challenge is how the money is spent. The idea that government should, under the social contract, aid people in pursuit of a better quality of life is not so radical in the twenty-first century as it seems to have been in the eighteenth. The proposition that we should reconcile our books according to a plan that would arguably diminish Americans’ quality of life is problematic, especially when the intention is that such diminution is intended to increase the luxury of the most prosperous sliver of our society.

A general question that is expressed simply enough: Is “The Economy” a tool by which we can measure our quality of life, or an overarching cause and idol to which we ought to be subservient?

Framing the nation’s fiscal considerations purely as a “spending problem” is a ruse intended to exploit both answers: The wealthiest should answer the former, and the rest of us the latter.

† a.k.a., “Paultard”, “Ron Paul Revolutionary”, &c. I’m not inclined to get so derogatory as to call Ron Paul’s supporters “Paultards”, but neither am I well disposed toward the idea of insulting genuine revolutionaries by including these libertarian evangelists among them. Sticking with the shorter “Pauline” actually seems to bother them, as I have offended more than one with the term in the past. As there is something downright cultish about the movement, “Pauline evangelism” seems to work well enough. And, besides, the phrase isn’t presently occupied; religious Pauline evangelists generally go by the standard misnomer “Christian” these days.

‡ I would, however, recall a conservative associate, a doctrinaire Republican, who once asserted, “Race is absolutely not the motivation for opposition to Obama, but it is used by some as a tool in the fight against him.” One should be cautious about addressing issues of racism with racists; I nearly herniated in disbelief.