There are so many aspects one might choose to address here. For instance, in the first place, I often hear from my conservative associates how I hate anyone who disagrees with me. Apparently, it doesn’t occur to these folks that I see a difference between the fact of disagreement itself and those who feel the need to lie to me in order to explain why their truth is so correct and mine is so evil. Of course, this is a common political dialogue; too common, in fact. That is, I’m sure I’m not the only one.

Or one might choose cynicism. Kondracke opens by explaining—

Just days after the Twin Towers were destroyed in 2001, President George W. Bush set the tone that ought to govern U.S. attitudes in the New York mosque controversy today.

While visiting the Islamic Center of Washington, he declared that “the face of terror is not the true faith of Islam …. Islam is peace. These terrorists don’t represent peace. They represent evil and war.”

He went on to say that American Muslims “need to be treated with respect. In our anger and emotion, our fellow Americans must treat each other with respect.”

—and some might suggest this is what a President of the United States must say, as others assert of President Obama’s refusal to call out Birthers, Tea Partiers, and other assorted fringe lunatics for their racism.

But these are also side issues, which is unfortunate in a way, since the more pressing demands, well, demand. 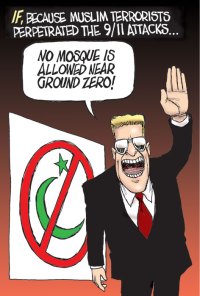 David Horsey, the Pulitzer Prize-winning cartoonist, recently considered the proposition to move the Park 51 development to another location: “Yes, it seems wrong to give in to the opportunistic bigots, but it may still be the right and healing thing to do.” And as much as I respect the man and adore his work, on this occasion I must object, and strenuously.

After all, what can we say of “the land of the free and the home of the brave” when the solution to strife is to give over to bullies and bigots? For how long have we heard that gay couples hoping to marry someday ought to respect the sentiments of bigots who are so insecure in their own marriages that the idea of two men, or two women, forming a lasting, familial union somehow threatens their own heterosexual endeavor? What is the point of having a “supreme law of the land” (Article VI, United States Constitution) if it should be set aside every time some half-witted bigot bawls about the injustice of equality?

Morton Kondracke has a point that his fellow conservatives (including Democrats) should heed. Sure, I think he gives Bush too much credit, all things considered; there was he whole lie to get us into Iraq, the bit about a crusade, and none of this helped the former president when that story came out about God telling him to invade Iraq. But these are matters of perspective; it would seem futile to hate Kondracke for that, and doing so would preclude any perception of another valid point he makes: “Why Bush won’t speak up now on behalf of the Muslim community center at the center of the New York controversy, I don’t know.”

The heart of the issue is that some people are deliberately torturing themselves. Look, it’s nine years on, and I have yet to receive word that anyone I knew died that day, so it’s fair to say I cannot imagine how the friends and relatives of the dead feel. But it’s fairly clear what some of them say; we’ve heard it enough these last weeks. Kondracke suggests that “relatives of 9/11 victims who object still are confusing Islam with terrorism”. And this is, to a degree, a fair point. What is taking place is not unique, nor even unusual. We do this sort of thing often in our lives; it’s just that that terrible day in September was rather quite spectacular, with tragic results that echo long after the last screams of the dying, or roar of the collapsing towers.

Muslim = Terrorist. This is a fallacious equation, and generally used in this case to support any number of other fallacies, such as the appeal to pity (ad misericordiam) and appeal to emotion. By maintaining this fallacy, the grieving survivors of the 9/11 tragedy extend their own suffering in order to exploit it. This brings about a certain, futile, illusory satisfaction; it is a means of wrestling with their own grief. Unfortunately, this is a fight with no end; it has, to borrow a phrase, no exit strategy. The point is to perpetuate grief, and justify oneself according to suffering. One need not be a therapeutic psychologist to understand this, but if you happen to know one, ask.

Horsey reminds, “This is the direction our country has always gone and it is one of the best things about us. Eventually, rational minds do prevail.” He is not wrong in this. Still, though, must that triumph of reason always come later, rather than sooner? And what do we accomplish by giving over to the bullies and bigots except prolong misery and forestall healing and reconciliation? For it is not merely with Muslims that the grieving survivors must reconcile; they must also come to terms with themselves.

How else, then, can one smile at what might be the greatest correction note in history? Horsey advises: “An earlier version of this post gave the wrong date for the Sept. 11, 2001, terrorist attacks.”

Maybe he’s a secret Muslim, you know. That’s the only explanation. And that can only mean he’s actually a terrorist.