Is there actually a name given to this truism yet? Not that I would want to claim it for myself, though. Still:

At any given nightclub rock show, it is inevitable that someone will vomit in a men’s room sink.

‘Nuff said on that, I suppose.

I stopped off at the larger bar in the Showbox, the one to your right as you walked in, not so much to erase the memory of the sink—I’ve seen enough of those in my time, and nothing compares to the disaster when AC/DC played the Tacoma Dome a few tours back—but to throw back a shot and leave my friends to enjoy the feeling of being cute. You know, newfound love and the sudden realization that one is no more immune to the mush factor than anyone else … I just figured they could use some time without me snickering impishly at every little kiss. 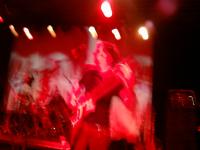 Makes a great excuse, doesn’t it?

Suddenly Erica appears, seemingly out of nowhere. Obviously, everyone and everything must come from somewhere, but being wrapped up in the show and concentrating on the Maker’s Mark in my hand, I didn’t notice her approach. But, suddenly, there she is, with a hand on my arm and looking at me curiously, as if I was a ghost.

And I might as well have been. We hadn’t seen each other in something like four years.

For those who don’t follow any particular bands, or don’t do regular club rock shows, there is a cameraderie that some might find strange. Some people you only see at shows. I’ve never encountered, met up with, or otherwise spent any time with Erica outside a Floater concert. Still, her face came alight with delighted familiarity.

I managed to spill a shameful amount of bourbon over my hand in the course of hugs and reacquaintance. And she asked after the short one, my former girlfriend, and I took out my phone to show her a picture of my daughter. That’s when things went a little strange. I must have been more drunk than I thought because, as I scrape my memory for even the merest suggestion, I can’t tell you what song the band broke out that sent her into a spasm of glee. It was a classic, though.

She grabbed my hand and hauled me along down two flights of stairs to the main floor, and as we entered the fray, I moved to put my phone away. It was too late, though, as someone clipped my right wrist in their flailing, and my phone arced into the writhing shadows of the mosh pit. With dutiful deliberation, I tied my hair back and peered down into the darkness at people’s feet. Obviously, that didn’t last long. My choices were to worry about it right then, and get my ass kicked, or worry about it later and get my ass kicked anyway. The first body shot actually knocked my earplugs out, but that’s why I prefer cylinders to bullets. And these were cheaper bullets than usual; normally, if you’re desperate, you can recycle earplugs for another concert, but these warped and compressed after the first set.

Still, once my attention was on my surroundings, I was able to hold my own, and if the pit was rougher than I liked, it was only because I wasn’t wearing the right shoes. Sure, that sounds like a cheap excuse, but you try surviving a Floater pit when you’re wearing Sperry deck shoes with no laces.

Yes, I’m that lame. I couldn’t even remember to wear shoes that tie. And I was sober when I left the house.

Floater played two sets, the first one admittedly unusual for opening with “The Watching Song” and one that was either a new track or a cover I hadn’t heard them play before. I haven’t seen the set list for the show, so I’m not sure. And, mindful that this was Carisa’s first Floater show, I actually mulled over their performance of “The Sad Ballad of Danny Boy”, which I haven’t heard played the same way twice in at least ten years. There’s a story there, but already I digress, so ….

After a couple songs in the pit, Erica and I retreated to the safety of the bar where she tried to introduce me to friends of hers, and then we had a strange, albeit brief dialogue as I started back toward the floor in search of my missing phone.

“They’re coming off the floor.”

So we headed back down as tired bodies streamed away during the set break. Still, visibility was poor, and Erica disappeared in some direction on a tip about her own missing phone.

Yeah. Two of us. Longtime Floater fans. And we both managed to lose our phones. How lame can we get?

Must be getting old, or something.

Suddenly a woman said, “Are you looking for a phone?”

She looked around on the edge of the stage. Someone’s eyeglasses were sitting there, so it didn’t seem impossible. And then she asked one of her friends. Turning back to me, she said, “Was it an LG?”

“Yeah. With an Apple sticker on the back?”

“I don’t know, but I think she gave it to a security guard.”

“I don’t know. But he took it to the coat check I think.”

And, surely enough, that’s exactly where I found it. Intact. Which is more than Erica could say for her own, but still, she did find its pieces. And the buttons still lit up when pressed.

Like a moron, of course, I carried the thing back out into the pit during the second set, and tried to take pictures of the show, telling myself that I needed to make sure everything still worked. And it did. I even shot some video of an excellent performance of the Doors’ “Waiting for the Sun”, but the audio is about what you’d expect it to be, beyond salvage.

Still, though, two phones and a car key—not mine. And really, who carries just a single car key in a sweatshirt pocket in a mosh pit? Well, Erica, I guess. But someone found that and turned it in.

We learned a long time ago to pick one another up in the pit, although I’ve always been cynical about this. It often seems this is more because a moshing mortality would endanger future shows than out of any specific concern for any one person. I remember a pit at Slayer in 1991 where it took me several minutes to actually get my feet under me, and a couple more to get clear of the vortex. Massive, insane, and even awe-inspiring, that one. Of course, it was actually dangerous to try to pick someone up in that tempest, as the waves of hurtling and plummeting humanity could easily take you down in that unguarded moment.

Still, my faith in humanity is largely driven by fantasy, and in certain settings I expect to be playing some variation of Lord of the Flies. After that first body shot in the pit, I had decided my phone was lost, and if I was lucky I would find its broken pieces and possibly salvage the SIM card for whatever its successor was. And I remember Erica suddenly saying something about her key being in the same pocket her phone disappeared from, but the significance didn’t hit me at the time. I was enjoying a cigarette and musing over having actually retrieved my phone intact. It took a while for me to clue in. In fact, I think it was about two seconds after she announced that she got her key back.

So, yeah, there’s something in there about the kindness of strangers.

(As to the pictures I took, well, the camera still works. But taking pictures with a phone camera while the pit lands on one’s back is an exercise in futility. I would love to wax philosophical about the work of Charles Peterson, but as you can clearly see, there’s nothing so cool as that going on. Rather, it’s just the blurring that comes with anonymous masses of humanity hitting you square in the small of the back. Still, the contrast all over Rob is appreciable. Says me.)