Someone, please, help me out: If … if, if, if …. If someone makes a claim based on a religious principle, what is the obligation to reconcile the claim with the religion?

A handful of people who believe digitized photos on state driver’s licenses could be the beginning of the biblical “mark of the beast” will receive special licenses from the Division of Motor Vehicles today.

Phil Hudok, a Randolph County teacher who previously refused to enforce school rules requiring students to wear bar-coded identification badges because it violated his religious beliefs, will be one of the first.

Hudok, pastor Butch Paugh and 12 others met with DMV Commissioner Joseph Cicchirillo in 2006 about the perceived problem. At the time, state officials were getting ready to comply with the federal Real ID Act of 2005, which would have forced states to share information about licensed drivers with other states.

Under the plan Cicchirillo established, Hudok and other followers of Paugh will be allowed to have their license photos taken at the Capitol DMV office and then removed from the computer system. DMV will maintain a hard copy of the pictures at the main office.

“What these people objected to was the digital image,” Cicchirillo said.

The federal act also requires personal information, such as birth dates and driving records, in the system. “All the other information stays there,” the commissioner said.

He said there has been no outpouring of people objecting to the digital photos.

“Right now, I have three or four people who have requested it for religious reasons,” he said. “I think what they told me was it had to do with the mark of the beast.”

END_OF_DOCUMENT_TOKEN_TO_BE_REPLACED 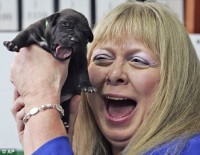 Okay, so if criminal kink and Kafka don’t cut your cake-hole, how about cloning? In case you haven’t heard, some woman apparently paid £25,000 to have her dead pit-bull cloned. Of course, that’s just for starters. There is some criminal kink—although not exactly kafkaesque—involved in this one, too.

The face was familiar, albeit older and heavier. The surname was the same.

So was the alleged American, ex-beauty queen background and the unusual devotion to pitbull dogs.

Surely it wasn’t? Could the new owner of the world’s first commercially cloned pups be the same woman who had gone on the run from British justice 30 years ago, having been the star of one of the most bizarre, entertaining and downright saucy court cases in living memory?

In 1978, Joyce McKinney jumped bail and disappeared after being charged with kidnapping a 17-stone male Mormon missionary, whom she had chained to a Devon cottage bed with mink handcuffs and forced to have sex ….

…. Were these two blonde, American, dog-loving and, yes, quite possibly barking mad, Miss McKinneys one and the same person?

Last night, when we spoke to ‘Bernann’ on the telephone, having tracked her down to a Seoul hotel room, her hostile reaction hardly quashed the intrigue.

Asked: ‘Are you really Joyce McKinney?’ she snapped: “Are you going to ask me about my dogs, or not? Because that’s all I’m prepared to talk to you about.”

Not exactly a flat-out denial, then.

Perhaps the Daily Mail is jumping the gun a bit here—they’re convinced the two McKinneys are, in fact, one and the same—but it makes for a hell of a headline, doesn’t it?

Of course, how long before you can clone your Mormon sex slave?

But, seriously: What ever happened to normal weird news? I mean, really. Cloning your damn dog is even creepier than having the taxidermist make it into a lamp. And raping a missionary allegedly wearing “some sort of Mormon chastity belt”? I mean, come on.

At any rate, a couple of punch lines from the article:

Hawes, an Oxford graduate and university lecturer, emphasises his total admiration for the literary Kafkaesque genius who wrote brooding classics such as The Metamorphosis, The Castle and The Trial, and argues that these discoveries merely show Kafka as more human than the popular image. He believes that “suppressing” them detracts from sensible assessment of his work, and has even led to nonsensical evaluation.

What? Did you catch it? Really, I’m not giving any hints on this one.

What? What the hell am I supposed to do with this?

On Monday, August 4, 2008 … while on routine patrol in a fully marked Fort Wayne police car … I was traveling northbound in the 4500 block of S. Hanna St. and observed what I believed was a naked man standing in front of a large picture window of a home, in plain view. I turned my squad car around and again observed the male white standing in front of a large picture window … in what appeared to be a well-lit living room with his genital region clearly visible to myself and others living or traveling on the road ….

…. I called for assistance from another on-duty unit and together … [we] approached the residence on foot. I could clearly see through the open front door, the male white … was lying on his sofa inserting an item, later identified as a claw hammer covered with a plastic bag, into his rectum while completely naked. We observed he had some type of lubricant on his genital area and buttocks which we learned was motor oil

(via The Smoking Gun)