Okay, this is too cool to pass up. And it’s important, too. I suppose we should start with the important, which is a fantastic, even spectacular—by Beltway standards—exchange between venerable Hearst columnist Helen Thomas and White House Press Secretary Dana Perino regarding the ongoing saga of waterboarding and the torture question.

After a period of near disinterest by the White House press corps in the wake of an April 9 report by ABC news that put decisions regarding “enhanced interrogation techniques” much closer to the White House than officials had previously acknowledged, Thomas raised the issue during Perino’s regular press briefing on April 23:

Q The President has said publicly several times, in two consecutive news conferences a few months ago, and you have said over and over again, we do not torture. Now he has admitted that he did sign off on torture, he did know about it. So how do you reconcile this credibility gap?

MS. PERINO: Helen, you’re taking liberties with the what the President said. The United States has not, is not torturing any detainees in the global war on terror. And General Hayden, amongst others, have spoken on Capitol Hill fully in this regard, and it is — I’ll leave it where it is. The President is accurate in saying what he said.

Q That’s not my question. My question is, why did he state publicly, we do not torture —

MS. PERINO: Because we do not.

Q — when he really did know that we do?

MS. PERINO: No, that’s what I mean, Helen. We’ve talked about the legal authorities —

Q Are you saying that we did not?

MS. PERINO: I am saying we did not, yes.

Q How can you when you have photographs and everything else? I mean, how can you say that when he admits that he knew about it?

MS. PERINO: Helen, I think that you’re — again, I think you’re conflating some issues and you’re misconstruing what the President said.

Q I’m asking for the credibility of this country, not just this administration.

MS. PERINO: And what I’m telling you is we have — torture has not occurred. And you can go back through all the public record. Just make sure — I would just respectfully ask you not to misconstrue what the President said.

Q You’re denying, in this room, that we torture and we have tortured?

MS. PERINO: Yes, I am denying that.

Thomas, disgusted by the answer and the press corps’ complicity, rebuked her fellows: “Where is everybody? For God’s sake.” 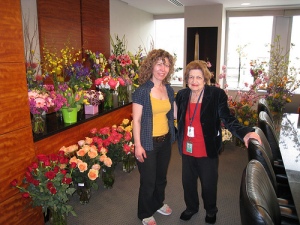 Okay, yeah. Important and cool. But it gets even better. As word of the exchange—and the accompaniment C-SPAN footage—made its way around the web, an outpouring of gratitude made its way to Thomas. Musician and graphic designer Micah Fitch organized an online campaign to send flowers to thank her for her efforts. According to Amy Argetsinger and Roxanne Roberts of the Washington Post, at least fifty bouquets had arrived at Thomas’ office so far, and more than five hundred people contributed $4,300 to the tribute. Thomas intends to share the flowers with friends and hospitals.